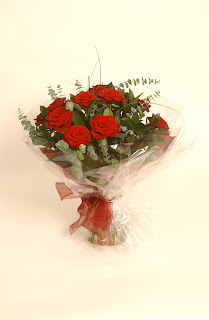 This is one of the times of year that it strikes me the most how different my professional life here in Mallorca is, compared to my London days.  The dawning of Valentine's Day when I owned three flower shops in London, was a time of lots of planning.  I would have to double our staff for a three day period, hunting down available free-lance florists who weren't looking for exorbitant pay, finding drivers who knew London well, whilst also being able to handle flowers with care.  The ordering was also a task to keep me awake for many a night - if you over buy and are left with Roses, your profit is gone.  Would people opt for white or pink instead of the traditional red Roses, would the discerning customer steer away from Roses altogether?  Once the buying was calculated, orders would starting rolling in, either over the counter or by telephone with some clients leaving cryptic messages and swearing us to anonymity and even over the years a few marriage proposals.  Bows would be made up of many evening at home, whilst watching the television.

Once the flowers arrived at our doors the dreaded task of conditioning the Roses would commence...  We actually invested in a de-thorning and Rose striping machine, which had rubber spiked cogs, electrically charged that you pushed a few stems of Roses into - a certain amount of muscle power was needed no to let the whole stem, head and all, be sucked into the whirring cogs.  For a few thousand red Roses and a hundreds of other coloured Roses this job would take many hours. Stems would be cut and placed in buckets of fresh water, which rubber bands tied around 6 and 12 stems for ease of eventually making up the bouquets.

Usually on the 13th February I would work through the night, with a team of florists who may leave at 10pm only to return at 5am.  Security guards would protect the stock overnight as a few of the shops were on main-line stations and there was simply not enough storage space to put away the flowers.  Drivers would arrive at 8am and be separated into areas, north, east, south, west or central London.  Extra care being taken to attach Valentine helium balloons, chocolates or teddy bears to bouquets as ordered and even the odd bottle of Champagne.  Once the drivers had departed and deliveries were made the phone would start to ring with people begging us to inform them of who the mystery sender was of their flowers, whilst also taking orders from clients in a panic who had not forward planned.  In the evening rush hour customers would come to the shops knee-deep to pick up a bouquet on their way home.  All hands would be on deck, serving the commuting public, with one person dedicated to operating the credit card machines and one on the till.  As the vases emptied and the clear up operation began there was always, for me, a feeling of being on a real high - all deliveries made, lots of Londoners lives enriched with the Valentine's day thrill and a job well done.

Us florists would then return home, with aching limbs and often bleeding hands from the stray Rose thorns and dream only of falling into a hot bubble bath and certainly no desire to see another Rose for quite some time and certainly not having the strength to be taken out for a romantic candlelit dinner, that could wait until another day!

So here on the island of Mallorca things seem to be quite different.  I am told that for any romantics here it would be more common to give a single Rose to their partner OR take them out for dinner and probably in these "crisis" times it would be too frivolous a gesture to shower your loved one with gifts.  We make a few bouquets up, but are certainly not overwhelmed with a deluge of orders like my London days.

A client rang a few days ago to say that he was desperate to obtain 30 of the best long-stemmed white Roses he could find.  Having missed the cut off for ordering flowers to be delivered to us in the normal way from Holland, I.e. via ferry, the only option was to have the flowers flown in, incurring high charges, but this seemed acceptable.  So a trip down to cargo at the airport and the flowers were here.  Stems stripped and Roses conditioned and put in water for a few hours to drink and re-cooperate from their journey.

Eucalyptus was also prepared, stems cut and lower down foliage removed.  After a few hours I put the Roses together.  Adding one stem at a time with a few stems of Euclyptus and gradually building up the bouquet, placing the stems at a diagonal in my hand, always keeping them going the same way. 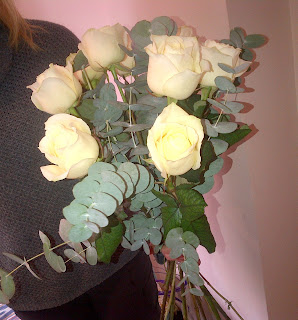 After holding about twenty of the stems in my (large) hand it becomes impossible to hold it altogether and the bunch has to be securely tied, enabling you to keep on adding more stems without fear of any slipping out.  I made the bouquet up in a domed shape, with the tallest Rose in the centre.  The bunch was the again securely tied.  Taking two squares cellophane I wrapped this around the base of the stems and tied this tightly around the tying point of the bouquet. 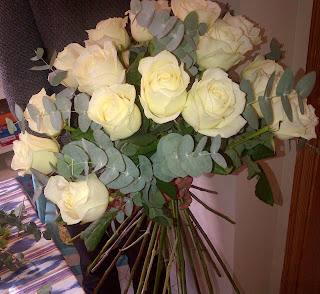 Triangles of tissue were then added loosely around the bunch, cello taping them together to make a skirt of tissue. 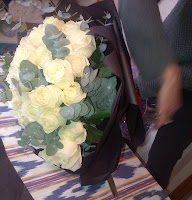 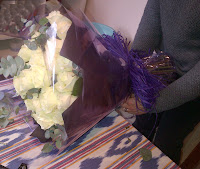 This process was then repeated with cellophane on top of the tissue.  A bow added, flower food attached and there we have a stunning bouquet of the best Roses available flown especially onto this island.  One happy client and I am sure gratefully received! 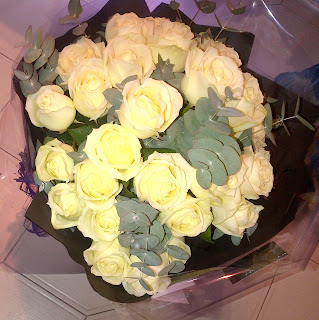 Enjoy your Fabulous Flowers for this week.

Joanna's Mallorca Flowers is the official blog for Joanna Walton Flowers. Looking for personalized flowers for your event, yacht, or home on the island of Mallorca? Find out more about our services by clicking the services link on the navigation bar above or browse our full site at http://www.joannawalton.com